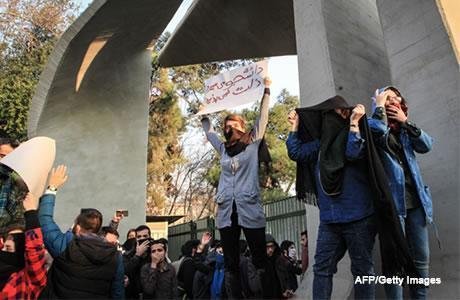 Women continue to have an active presence on the fourth day of the nationwide uprisings in Iran on Sunday, December 31, 2017. They brazenly stood up to the security forces and confronted them.

In the protest gathering in Rasht, northern Iran, women had a remarkable presence.

In the clips received from Isfahan and Shahreza (central Iran) and Kermanshah (western Iran), women are clearly heard chanting loudly against the regime. In some scenes, they led the protesters and directed the chants.

A young woman in Tehran confronted the paramilitary Bassij and the crowd eventually drove him out of the scene by their chants of “death to the dictator.”

At Tehran’s Enghelab Square, a woman was getting arrested, but the crowd of protesters prevented security forces from taking her away.

In Zanjan (northwest of Tehran), and Orumiyeh, capital of West Azerbaijan Province, in northwestern Iran, women daringly defied and stood up to security agents.

The uprisings and protests have spread to more than 40 cities across Iran in a matter of four days.

In addition to the nationwide protests which were sparked by protests against high prices, people plundered by Caspian Credit Institute in Alvand, staged a protest in front of this branch on Sunday, December 31, 2017, demanding reimbursement of their deposits.