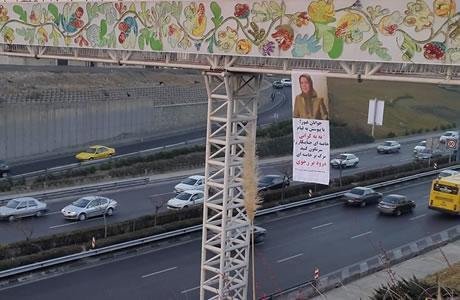 Parand is located in Robat Karim, southwest of Tehran. Abdollah Pashaki, the State Security Force commander of Robat Karim in southwest Tehran, announced that those arrested were among the protest leaders and active protesters. (The state-run ILNA news agency – January 1, 2018)

According to the reports reaching the Iranian Resistance, more than 1000 protesters have been arrested in the first four days of the uprisings across Iran.

At the same time, supporters of the Iranian Resistance hung a huge banner bearing the image of opposition leader, Maryam Rajavi, from a pedestrian bridge overlooking Ashrafi-Isfahani expressway in west Tehran.