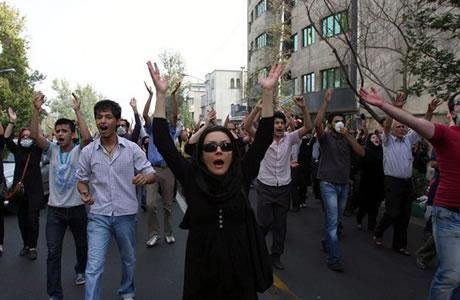 Iran: Women are the force for change

Iranian women and men continued their struggle for freedom shoulder to shoulder on Sunday, December 31, 2017, and clashes and confrontations with the regime’s suppressive forces continued until midnight in more than 40 cities.

Women’s bravery and courage lift the spirits high among protesters wherever they are.

At least two were shot and killed by security forces in Izeh, (Khuzistan Province) and one in Tuyserkan (Hamedan Province). The total number of those killed in the protests have reached at least five over the past two days.

In the video clips coming out of Iran, voice of women is clear in every scene.

In Tehran, a woman was poisoned by tear gas and was helped transferred to hospital.

A young woman posted a photo of herself after being hit in the back by batons and pepper sprayed in the face.

Women in Hormuzgan, coastal province in southern Iran, took part in tearing down the large banner of Khamenei in the street.

A young woman from Ilam (western Iran) posted her clip while writing graffiti on the wall calling for death of the dictator.

In the latest images posted on the internet from demonstrations on December 31, a brave woman is calling on people to join in the protests.

A woman with visual impairment participating in one of the protests, addressed Khamenei saying: “60% of Iranian people are hungry. They are embarrassed to go home at night. Look at my hands. I am a toiler. My children are hungry.”