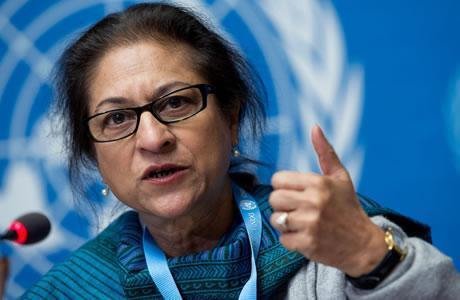 Ms. Asma Jahangir, UN Special Rapporteur on human rights situation in Iran, sent a tweet on January 2, 2018, in which she wrote:

Iranian citizens have a right to unprovoked peaceful protest. My condolences for the martyrs and urge end of violence.

The Iranian people’s uprising and anti-regime protests has spread to over 100 cities over in six days since December 28, 2017. In the course of these demonstrations against horrible living conditions in Iran, at least 30 have been killed and over 1000 people have been arrested.

Women play a pioneering role in these protests. In a demonstration on Monday, January 1, 2018, in downtown Tehran’s Vali Asr Square, courageous girls chanted, “death to the dictator” and led the protesters.

Video clips from Sedeh, in the central province of Isfahan, and port city of Bandar Abbas in southern Iran, show women’s active participation in the protests, in tearing down Khamenei’s posters, and in all the scenes.