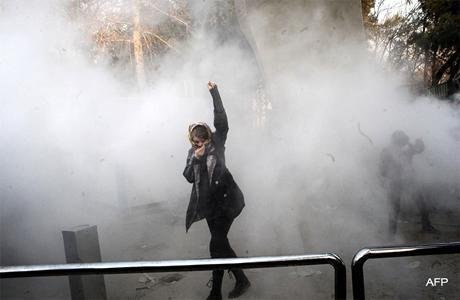 A new wave of protests has swept across Iran since December 28, 2017, quickly spreading to over 100 cities in less than a week most radically targeting the foundations of the entire clerical establishment.

The outbreak of protests reflects widespread discontent not only over rising prices, government fraud and corruption, and the clerical regime’s costly involvement in regional conflicts but also the nation’s deep-seated fury against the mullahs’ oppressive rule.

People are clearly demanding the overthrow of the clerical regime, vowing not to back down unless they gain their rightful demands for freedom and for a decent living. Everyone knows this will not happen without regime change and the ouster of the ruling mullahs. In their angry chants, protesters call the mullahs and the regime’s leaders and officials “thieves” and blame them for the majority of the nation’s destitution.

Most remarkably, women are actively engaged everywhere, in every protest, confrontation and venture.

Women have demonstrated tremendous courage, fearlessly confronting armed security forces empty-handed, encouraging others to not fear and carry on, inviting everyone to join the protests, leading the chants of “death to the dictator”, tearing down the images of Khamenei in every city and fending off security forces trying to apprehend young protesters.

The nationwide uprising was sparked by a big demonstration against rising prices and corruption in Mashhad, Iran’s second largest city. Women were numerous, loud and active in this protest which spread to vast parts of the holy city. Eyewitnesses described women’s role in the demonstration as admirably courageous.

A daring scene caught on the videotape which happened just on the second day of the protests was created by a woman in the western Iranian city of Hamedan. While surrounded by security forces, she shouts “death to Khamenei” for the first time and then repeats it a couple more times before being whisked away by a friend.

The protesters in Mashhad had only gone so far as to chant “death to Rouhani”, the mullahs’ president, and “death to the dictator”, stopping short of openly addressing Khamenei, the mullahs’ supreme leader. But this courageous woman in Hamedan broke the spell, opening the way for other protests where the chants against Khamenei gathered steam.

From then on, people started to burn Khamenei’s huge portraits and tear them down in every demonstration in a show of rejection of “the dictator.”

In Tehran, young women studying at Tehran University were actively engaged in confronting the university’s guards and in efforts to open the gates and march on to the streets. They were highly spirited, encouraging others to unite and not fear anything and leading the students with chants of “death to the dictator” and “death to Khamenei.”

In another picture going viral on the internet was of a young woman outside Tehran University covering her face and holding up her fist in the air as she runs from tear gas.

A young woman has been caught on the videotape while challenging security forces during the protests in Zanjan, northwest of Tehran.

We have also received a considerable number of video clips showing a large presence of women in the demonstrations in all major capitals.

Some also show women talking to crowds of bystanders and urging them to join the protests. A woman in Qods city declares, “You raised your fists and ruined our lives. Now we raise our fists. Be men, join us. I as a woman will stand in front and protect you. Come represent your country.”

And of course, dozens of women have been brutalized and violently arrested by the regime’s repressive forces and anti-riot units.

Of course, this is just the beginning. Women are going to play a greater role and have a great impact on the anti-regime struggle and democratic movement.

Before the recent uprising begins, women also played an impressive role in the protests of various social sectors, as reported earlier by the Women’s Committee of the National Council of Resistance of Iran.

Having borne the brunt of repression for almost 40 years under the mullahs’ rule, Iranian women are the force for change, a compressed coil that is going to spring out even further as the spell of repression is removed.

The world witnessed this to a certain extent and on a general level during the 2009 uprising. But the most vivid proof comes from the Iranian people’s organized Resistance movement where women hold leadership positions.

The women of the Iranian Resistance paid the price of freedom with utmost dedication and sacrifice in the 1980s and proved their worth and competence during the dark era of vicious tortures, mass executions and the 1988 massacre of 30,000 political prisoners.

After earning their rightful place in the leadership of the Iranian Resistance, these women have preserved the movement and led it under the most difficult years and through the most complicated circumstances since 2003.

The women of Iran are resolved to turn the page of their country’s history in the 21st century and in their quest for freedom and equality, Iran’s women deserve support from all freedom-loving people of the world.