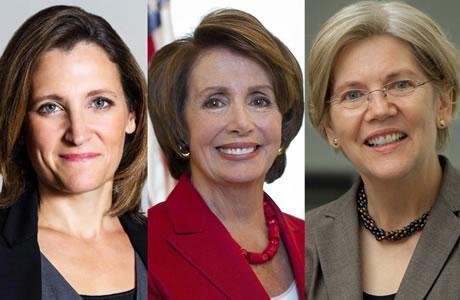 Senior woman politicians in the U.S. and Canada declared support for the ongoing uprising in Iran.

Nancy Pelosi, the Minority Leader of the United States House of Representatives, tweeted on January 2, reiterating, “Iran must pay attention to voices of the courageous protesters speaking out for their rights and well-being. That is the only way forward.”

At the same time, Senator Elizabeth Warren (D-MA) tweeted, “I stand with the right of the Iranian people to peacefully protest. The people of Iran deserve a government that respects human rights and works to address their grievances.”

On January 3, 2018, Hon. Chrystia Freeland, Canadian Minister of Foreign Affairs, issued a statement in which she said, “Canada is deeply troubled by the recent deaths and detentions of protesters in Iran. The Iranian people have the right to freely assemble and express themselves without facing violence or imprisonment.

“As we said last week, Canada is encouraged to see the Iranian people who are bravely exercising their basic right to protest peacefully. We call on the Iranian authorities to uphold and respect democratic and human rights, which are too often ignored.

“We remain concerned for the well-being of protestors and will continue to closely monitor the protests.”