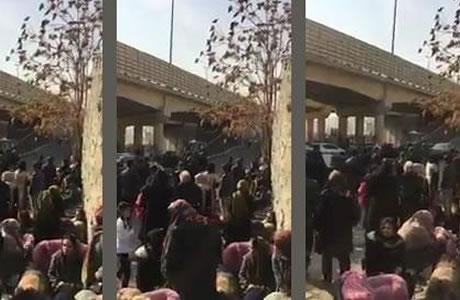 The mothers and families of the youths arrested during recent protests in Iran, continued their sit-in outside Evin Prison for the sixth consecutive day and chanted, “God is great.”

The sit-in started on the second day of protests by families of arrested Gonabadi dervishes and expanded and continued with rising number of arrests.

On the eight day of protests on January 4, 2018, when the uprising has spread to over 120 cities across Iran, at least 45 persons have been killed by the regime’s suppressive forces and at least 1500 persons have been arrested and imprisoned.

At the same time, there have been various reports of defections in the ranks of the regime’s repressive forces to the ranks of protesters.

A former Bassij member posted a clip on the internet, showing her burning her membership card. She is heard saying, “Most of the regime’s leaders are like members of Daesh (ISIS).” She called on all Bassij members to defect the regime.

Iran: At least four female students arrested in the uprising