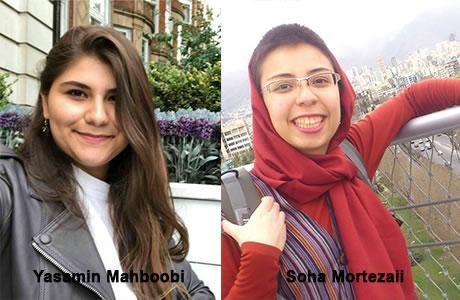 The news of the arrests of at least 21 women during nine days of nationwide protests in Iran has been published in the state media and press.

According Abdollah Pashaki, Chief of Police in Robat Karim district of Tehran, announced, “Three women who had significant role in the riots in the town of Parand have been arrested by the State Security Force.” (The state-run ROKNA news agency – January 5, 2018)

He had already announced the arrest of another three women in Parand.

Qassem Abdollahi, General Director of the Justice Department in Markazi Province, also announced that a number of Iranian women had been arrested for exercising their right to freedom of expression.

In addition to the 21 women listed above, the arrests of six female students have been confirmed: Soha Mortezaii, Faezeh Abdipour, Leila Hasseinzadeh, Yasamin Mahboobi, Negin Arameshi, and Touran Mehraban.

Soha Mortezaii, is the secretary of the central council of Tehran University students, who was arrested at home in the morning of Thursday, January 4, 2018.

Yassamin Mahboobi is a student of anthropology at Tehran University.

The actual number of girl students and young women is definitely much higher than what has been published or confirmed.