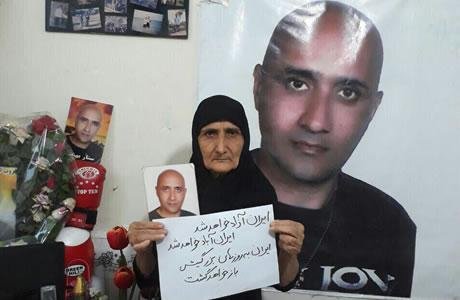 Ms. Gohar Eshghi declared her solidarity with the Iranian people’s uprising and expressed hope that Iran will soon be free and prosperous.

Ms. Eshghi is presently under house arrest. She had earlier intended to join the protesters and was about to leave her house while wearing a white shroud, but Intelligence Ministry agents prevented her from doing so and she has been detained in her own house since then.

Ms. Eshghi published a photo of herself while holding a piece of paper on which she has written: Iran will be free. Iran will be prosperous. Iran will return to its great days.

Ms. Eshghi’s son, Sattar Beheshti, was a dissident web logger and a worker who was killed under torture on November 3, 2012, for writing blogs against the clerical regime.