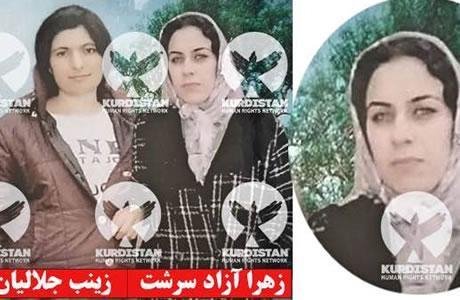 The news of suspicious death of a woman, formerly imprisoned in the same ward with Kurdish political prisoner Zeinab Jalalian, was disseminated on January 6, 2018.

The corpse of former prisoner, Zahra Azadseresht, was found at her home in Kermanshah on October 14, 2017. Ms. Azadseresht was under pressure of the Intelligence Department of Kermanshah for her relations and contacts with Zeinab Jalalian.

The Kurdish woman had been in prison for four years on ordinary charges. She befriended Ms. Jalalian when she was serving her sentence at the Rehabilitation Center of Kermanshah and the women’s ward of Diezelabad Prison of Kermanshah, in western Iran.

Ms. Azadseresht did not heed warnings by the counter intelligence section discouraging prisoners from contacting Ms. Jalalian and maintained constant contact with her.

After being released, Ms. Azadseresht paid visit to Zeinab and contacted her a number of times, for which she was subsequently interrogated and intimidated by the Intelligence Department. She was also fired from her job.

Intelligence Department agents had told her that she would be relieved of their pressures, only if she appears on TV and denies that Zeinab Jalalian is sick. They even offered her money, but she did not accept to do so.

Eventually, her body was found by her relatives at her home on October 14, 2017. The Coroner’s Office claimed that she had taken drugs and committed suicide.

She had called Zeinab Jalalian five days before she was found dead, and in this telephone contact, she did not mention anything about her decision to kill herself.