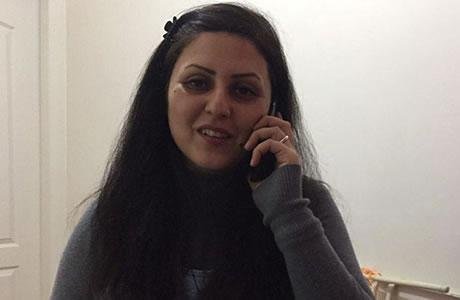 Freedom-loving writer and human rights activist, Golrokh Ibrahimi Iraee, sent out an open letter from behind bars of Evin Prison on January 9, 2018. The political prisoner imprisoned in the Women’s Ward of Evin declared solidarity with the Iranian people’s uprising and called on Iran’s youths to continue their presence (in the streets), unite for their common cause and pay the price of freedom.

What’s important these days is continued presence, consciously taking steps and withstanding the terror and intimidations.

The ultimate goal is definitely achievable if we want and if we believe. We must recognize the enemy’s trickery. In the ups and downs of struggle, we must think of the end, i.e. freedom from the yoke of fundamentalism and tyranny, without getting emotional, frustrated or disappointed.

These days, when our people have become disillusioned about the false distinction between the two fundamentalist and reformist factions (of the regime) and the latter’s misleading tricks have lost effect;

In these tumultuous days, when the statistics on poverty, unemployment and wide class gap has placed more than half of the population under the heavy wheels of inflation;

These days, when we see the shutdown of more and more factories and workshops and an increasing number of people losing their jobs, and we see that payment of workers’ wages are postponed for many months and we see that people’s deposits get disappeared in institutes which were supposed to be safe keepers;

In this unjust court, where the inferior and low-income social strata get crushed and the trade unions and syndicates are not allowed to object or follow up on their demands and if they do, they are harshly suppressed;

In these days, when the number of executions has been skyrocketing and every dissident is somehow murdered by the state killing machine under some pretext regardless of being a Kurd, Lor, Baluch, Turk or Arab, a political or human rights activist, a freedom lover or a protester among workers, drivers, students, teachers and religious minorities;

Now that they have established their fundamentalist reign under the banner of religion and take advantage of our people’s religious and traditional sentiments under any pretext to incite the public opinion;

It is upon us to remove this illusive rule of oppression; we must follow up on our righteous demands of which we have been deprived for years, and we must stand up to the ruling tyranny and repression. Such perilous circumstances are not to be blamed on the rulers and governors, alone, but also on those who were governed and tolerated the oppression.

We must diagnose the pain before we can find the cure.

So long as we bow down to oppression and tyranny and see ourselves as the oppressed, the oppressors will certainly lead us anywhere they want under their lashes, and there will be no change.

Those who invaded our country with the hollow mottos of supporting the downtrodden and providing people’s basic staples for free and a thousand other fake promises, they did nothing but injustice when they sat on the throne of power. They have none but oppression on their record.

We have not forgotten the parallel conducts of leaders of the two ruling factions – the fundamentalists and the reformists. Those who shamelessly defended and insisted on their crimes and those who cowardly hid their faces behind a mask of deceit, they have been united since 1981 up until now, in issuing the orders for opening fire on people and cracking down on them.

Their treacherous rule can be overthrown if we step unto the road with open eyes, and if we realistically understand that we have to thread a long way at heavy cost and our enemy is ferocious.

If we are thinking of freedom from the yoke of tyranny, if we no longer want to beg for our rights in our own homeland, we must evaluate the price we have to pay in this difficult path. By experience, we know that this price includes imprisonment, torture and execution and being accused of waging war on God. We must not fear the difficulties.

We must believe that every fear can be overcome, every demand can be achieved and every wall of oppression can be shattered.

Today, we need to organize the protests; dissident groups must unite; various schools of thought, associations, unions, etc. need not struggle under the same flag but towards the same goal. This must be done is the best way. Otherwise, it is inevitable that we will be dispersed. There is the risk that this vast presence of people would be taken away by opportunists who are waiting in the wings.

Standing until the dawn of freedom with the protests that have shaken the earth in every Iranian city, town and village and embrace all social strata, walks of life, associations and organizations, targeting the tip of the pyramid of tyranny, oppression, injustice and fascism,

The International Day of Sports for Development and Peace (IDSDP), which takes place annually on April 6, presents an opportunity to recognize the positive role that sport and...

Iran: Women required to wear a head cover even under surgery