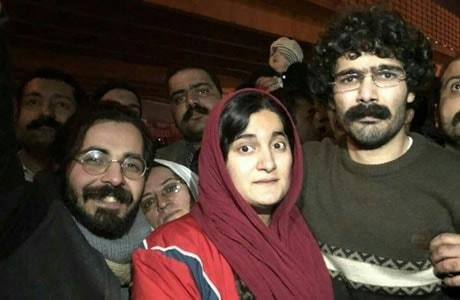 The gathering of mothers and families of arrested protesters outside the Evin Prison escalated Tuesday evening, January 9, 2018, with a large crowd joining them and secured the release of four prisoners including a woman.

The sit-in protest started on December 29, on the second day of the uprising.

The mother of imprisoned blogger, Soheil Arabi, and former political prisoner and lawyer, Nasrin Sotoudeh, were among those who joined the families.

Evin’s security forces motorcyclist units roamed into the crowd and threatened the families with new arrests in order to disperse them, but the families put up a strong resistance and prevented any arrests. By the end of the day, they secured the release of four Gonabadi dervishes, including Faezeh Abdipour.

The mothers and families say they will not leave until their children are free.

There was also news that the families of those arrested in the city of Ahwaz, capital of Khuzistan Province in SW Iran, gathered in front of the city’s Revolutionary Court and demanded freedom of their children.