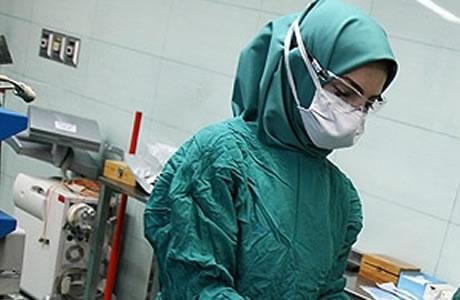 Iran: Women required to wear a head cover even under surgery

According to a report published by one of the Iranian state-run websites, women have to cover their heads even under surgery in some of the hospitals in the capital.

“Can’t enter the hospital’s emergency room without the chador,” says a middle-aged woman standing at the hospital’s entrance to prevent women from entering if they are wearing manteaux.

Some of the clinics and hospitals in Tehran require women to wear the chador before walking in. Baghyatollah Hospital is one of these centers.

The patients who are not feeling well and need to rely on others to walk must also observe this requirement.

The woman guarding the entrance says, “Those who come on their own feet, we make them remove their make-up. Here, we have everything. Make-up remover, nail-polish remover, napkins, … Those who have graft acrylic nails, must wear gloves.”

The chador – head-to-toe black veil—is not only compulsory in the hospital’s clinic but also inside the hospital and even in the emergency room. The female patient’s gown for the operation room also includes a maghna’eh (head cover which is tighter than a scarf).

Sara whose mother has recently had an operation in this hospital says, “My mother did not feel well and was very anxious about her operation. My mother had breast cancer and the doctors would see her body. So, I don’t know what was that head cover good for.”

“We came to this hospital because of our insurance contract but women and their companies are very much distressed in this hospital,” added Sara. (The state-run Fararu.com, January 11, 2018)