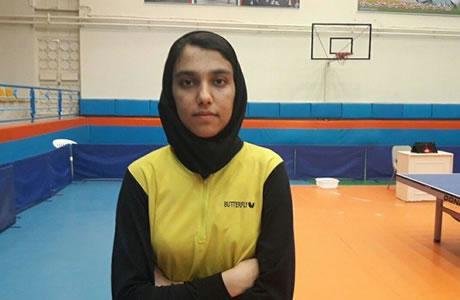 A young woman, member of Iran’s national Ping Pong team, Mahshid Ashtari, says the Education Department told her to concentrate on her studies instead of doing sports.

In an interview with ISNA news agency, Ms. Ashtari said, “Both the Education Department and the Department of Sports and Youths in Razavi Khorassan refused to give me any support. They did not give me any technical or financial assistance.”

On the state of her education, she said, “I had to travel to Germany in June during my final exams to take part in the international Ping Pong tournaments. I had expected to be rewarded in some form after winning medals for my country.”

She added, “Unfortunately, I had to drop one of my courses and because of it, I did not go to school for three months. When I followed up on my case, I was told to quit sports and study. They told me, a national team player, ‘You are a girl. You should study instead engaging in sports.’”

The national team player, Ashtari, said, “After these problems and three months of being deprived of going school, I needed an affidavit from the school where I studied, so that I could get a viza to travel to Portugal. But they did not help even this much.” (The state-run ISNA news agency – January 21, 2018)