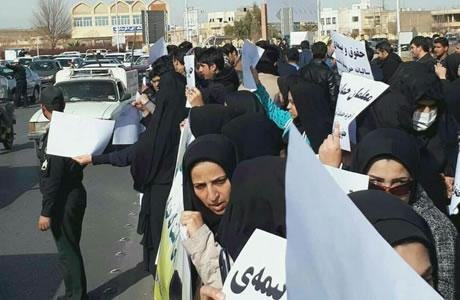 The women teachers of Yazd continued their protest on Tuesday, January 23, 2018, for the second consecutive day outside the Governorate in the capital of this central Iranian province. They demanded receiving ten months of their unpaid salaries.

On the same day, the women and men cheated by the state-backed Caspian Credit Institute in Rasht, northern Iran, staged a protest on Tuesday, January 23, 2018, demanding reimbursement of their money and property plundered by the Revolutionary Guard Corps.

The protesters chanted slogans accusing the institute and the government of stealing and abusing Islam.