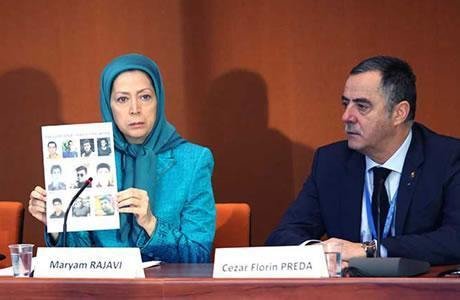 Maryam Rajavi urged release of those arrested in Iran uprising

At a press conference at the Parliamentary Assembly of the Council of Europe, Mrs. Maryam Rajavi declared the Iranian people and Resistance’s demands from Europe and the International Community in general, in the wake of the uprising which shook the Iranian regime to its foundations in the first two weeks of 2018.

Summing up the points she had already raised on the same day in three official meetings at PACE with EPP, ALDE and UEL groups, Maryam Rajavi underscored the volatile state of the Iranian society and pointed out that dozens were killed by the Revolutionary Guards and security forced in the course of the uprising. At least 8000 have been arrested. Many have been killed under torture while in detention and many young protesters are missing. “These are clear examples of crime against humanity.”

She urged Europe to end its silence and inaction. “The Iranian regime must understand it has to pay a heavy price for opening fire on demonstrators and killing them under torture,” she reiterated.

Suppression of women and the compulsory veil

Iranian opposition leader Maryam Rajavi laid particular emphasis on the suppression of women in Iran while urging the Council of Europe and its member states to adopt effective measures and binding decisions to compel the religious fascism to “immediately free those arrested during the uprising; guarantee freedom of speech and association; stop suppression of women and abolish the compulsory veil.”

She stressed, “Thirty-nine years of bloodshed and crimes, discriminations against and suppression of women, repression and censorship is enough.”

She further noted that the Iranian regime is on its last leg. The situation in Iran will not return to the pre-uprising stage. The people of Iran will continue their struggle until the regime is overthrown.

The Council of Europe, the European Union and its member states, and the United Nations must stand with the people of Iran and not the religious fascist regime.

The NCRI President-elect urged the UN High Commissioner on Human Rights to launch an international delegation to investigate the deaths, detentions and disappearances and the murders in prisons.

The NCRI President-elect Maryam Rajavi stressed that doing business with the Iranian regime fuels its killing machine and its export of war and terrorism to the Middle East since the economy is concentrated in the hands of Khamenei, the mullahs’ supreme leader, and his terrorist Revolutionary Guard Corps (IRGC). She therefore urged an end to all diplomatic and economic relations with the Iranian regime and comprehensive sanctions against the regime for decades of crimes against humanity.

Iran: Mother and her newborn taken hostage by a hospital in Mashhad