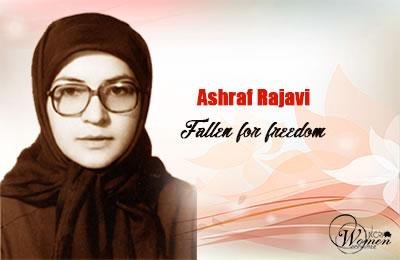 On February 8, 1982, Khomeini’s Revolutionary Guards surrounded and destroyed the headquarters the most prominent leading figures of the PMOI. Khomeini –still alive in those days– thought that by dealing such a heavy blow to the opposition, he could put up a show of force, demoralize the staunch supporters of the movement and break their resistance in prisons and outside.

It was an unequal battle between thousands of heavily armed guards vs. 20 freedom fighters. He thought victory is certain. However, the champions of freedom did not surrender and fought to the last breath, creating an epical scene that strengthened the movement even further.

The women involved in this battle left a brilliant legacy in the history of the Iranian people’s struggle for freedom and democracy. Today, their resolve and courage has been multiplied in the ranks of the pioneering women in the PMOI who lead the Resistance movement.

The shiniest image in this episode belonged to Ashraf Rajavi.

‌Born in 1951 in Zanjan, she received her Bachelors of Science in Physics from Tehran’s Sharif Industrial University. But Ashraf’s heart bled for the deprived people who suffered in a country that sits on a sea of oil. Despite having the opportunity to lead a good life, she chose to help the underprivileged and travelled long distances to various cities and villages to learn about their problems and help them find solutions.

After February 8, 1982, the life and death of Ashraf Rajavi became the tradition of a generation of PMOI women in Iran who lead the Iranian Resistance today.