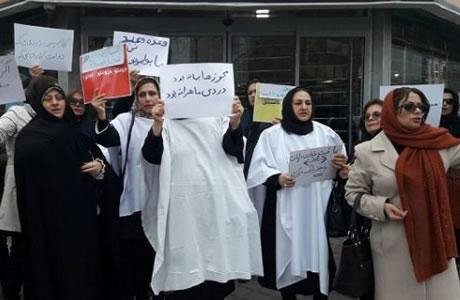 In a symbolic act in Rasht, capital of Gilan Province in northern Iran, women put on white shrouds and gathered outside the Governorate building and subsequently marched to the Golsar Branch of Caspian Credit Institute owned by the Revolutionary Guard Corps (IRGC).

They chanted slogans accusing the government of pilfering their money. They pelted rotten eggs and tomatoes at the entrance of Caspian’s branch in Golsar. Women chanted slogans vowing to continue their protests until they receive their money back to the last touman.

In Tehran, men and women plundered by the Caspian Institute staged a picket line outside the central branch of this institute on Africa Ave. Women actively participated.

The plundered protesters chanted against the government and the Central Bank, demanding punishment of perpetrators of economic corruption.