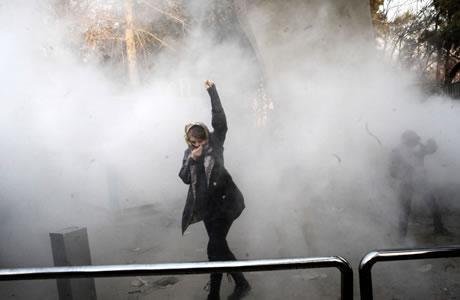 A group of political and civil activists and activist mothers signed a declaration in support of the nationwide Iran uprising in January.

The declaration reads in part, “We support the uprisings of the people of Iran in every town and city, because we have tied our hope to the powerful hands of our own people… The Islamic Republic regime does not represent the people of Iran and has lost its legitimacy all together.

We know that the honorable people of the world will pressure their governments to support the uprising of the people of Iran. Everyone must know that Iranians will no longer allow their oppressors to plunder their wealth and they do not recognize or accept any economic or political deal signed with the criminal officials of the Islamic Republic.

The people of Iran, united in their hearts and cries and in absolute solidarity, are determined to send the murderers of their children to the dustbin of history.”

Among the signatories are Shahin Mahinfar and her husband who lost their son in the 2009 uprising when the SSF vehicle ran him over; Raheleh Rahemipour, a plaintiff seeking justice for her brother who was executed in the 1980s and her missing niece; Sholeh Pakravan, whose daughter was executed in 2014 for defending herself against rape; Massoumeh Nemati and Atena Daemi, parents of political prisoner Atena Daemi; Farngis Mazloum, mother of imprisoned activist Soheil Arabi, and many others.

Iran: Plundered women go to Tehran to be heard