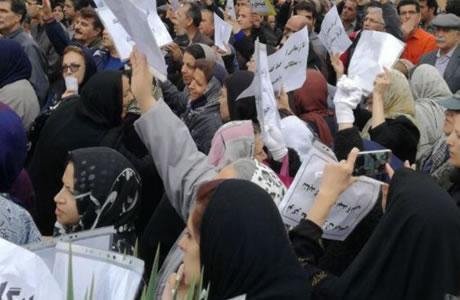 Contract teachers, women and men, staged a protest in Tehran on Saturday, February 10, 2018. They have not received their wages for four months.

The teachers said five months past the new academic year, they have been paid only once. They earn only 800,000 toumans per month which is already below the minimum wage of 930,000 toumans. Not having received wages for four months has caused many problems for the teachers who work on contracts.

On the same day, a number of plundered women and men staged a gathering in front of the mullahs’ parliament, Majlis. They declared the only way to gain their right is to continue staging protests, otherwise officials will not pay them their money.

Also on Saturday, February 10, men, women and children from Abu Haven village near Bavi, in Khuzistan Province, staged a protest outside the Governor’s Office in Ahwaz because they do not have water, power, gas and roads in their village.

Earlier, on Wednesday, February 7, a group of people who reside in the Islamabad village in Miyaneh, East Azerbaijan Province, protested the pollution caused by Azerbaijan’s Steel Factry in Miyaneh. The pollution has disrupted people’s lives in this village.

One of the protesters said, “Pollution and smug have filled our homes and created respiratory problems for our children. The smoke and dust produced by this factory cause cancer.”