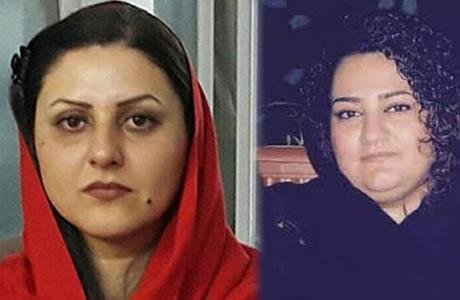 The Secretariat of the National Council of Resistance of Iran issued a statement on February 13, 2018, urging international human rights and women’s rights organizations to take urgent action to save the lives of women political prisoners, Atena Daemi and Golrokh Iraee on the 11th day of their hunger strike.

According to the Iranian Resistance, the regime has taken reprisal against Atena Daemi and Golrokh Iraee for declaring support for Iran uprising in late December and early January.

They were brutalized on the night of January 24, and unlawfully transferred to Qarchak Prison in Varamin, where they would be in danger of contracting Hepatitis and other diseases due to low sanitation and contagious diseases rampant in its overcrowded wards.

Ms. Daemi and Ms. Iraee have been on hunger strike since February 3, to protest violation of the principle of the separation of prisoners’ categories and their unlawful transfer to Qarchak Prison. They demand being returned to Evin Prison. They also demand the return of another Evin inmate, Soheil Arabi who has been sent to exile to Greater Tehran Prison.

Political prisoner Soheil Arabi, blogger and photographer, went on hunger strike on January 24 in protest to the banishment of Atena Daemi and Golrokh Iraee, after which he was sent to Greater Tehran’s Prison.

Iran: 65 per cent illiterates in Khuzestan are women