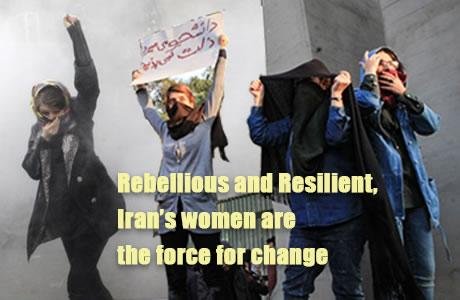 Rebellious and resilient, Iran’s women are indeed the force for change.

This was vividly seen in Iran throughout the past year and of course, most conspicuously during the uprising in December and January.

Although the situation in Iran is extremely oppressive for women and they have borne the brunt of repression for the past 39 years, they are not submissive contrary to the regime’s expectation.

Look at women’s education in Iran. Low legal age of marriage and forcible marriage of

girl children, discrimination against them in education, traditional prejudice against girls’ education in the villages, poverty and many other factors make girls their primary victims, leading to tens of thousands of girls dropping out of school at young age.

At college level, young women are banned from studying in some 80 fields, and many universities have set quotas for girls’ admission. Some universities are gender segregated and teach some fields only for men. Despite all these obstacles, women have made up over 50 per cent of university admissions every year, for some 15 years.

Look at women’s sports. Women have no government or private support. Those women who wish to participate in international tournaments, have to pay for their own travel, practice, equipment, etc. But Iranian women are so motivated that they continue to be active in sports and win medals.

The mullahs’ supreme leader banned them from cycling in public, but Iranian women not only continue to cycle in the streets but they buy their own bikes and participate in Asian games.

They have no decent field to play and no spectators, photographers or reporters are allowed in their games, but Iranian women and girls are among the best football players in Asia. They are banned from entering stadiums. A few months ago, one of the top ayatollahs declared that the issue is out of question and women must not enter stadiums to watch men’s games, period. Nevertheless, young Iranian women defied the mullah, wore make up and posed as men and entered the stadiums to watch their favorite teams.

In music and arts, women have been increasingly hanging on and performing in large numbers, although they have been banned from performing in public, singing solo, and musical concerts are often cancelled due to the presence of female members in the band or orchestra.

As for the compulsory veil, they have frustrated the regime to the extent that officials confess having failed to impose the Hijab on Iranian women. For at least a decade, Iranian women have been defying vice and guidance patrols and flouting the regime’s dress-code, while accepting the price for making their statement.

The situation with women is so sensitive that the mullahs’ President, Hassan Rouhani, did not dare to include a single woman in his cabinet. Although all observers believe that the inclusion of even more women could not resolve the problems women face in Iranian society, the clerical regime is so vulnerable on the issue of women that it could not afford even a single cosmetic gesture in this regard.

And finally, despite zero participation in political leadership and decision-making, women were present everywhere during the uprising and in hundreds of protests last year, to help decide their own destiny.

And the women political prisoners dared to send messages to protesters from behind the bars, encouraging and urging them to take the risks and pay the price of freedom.

As one journalist1 noted “real women freedom fighters” are in the streets of Iran.

Of course, this is not a spontaneous phenomenon. Iranian women have always had role models to look up to. The Muslim women of the People’s Mojahedin of Iran (PMOI) who defied the mullahs in the face, defended women’s freedom of choice from the onset, and made a mockery of the mullahs’ fake adherence to Islam. Those who paid the price of standing on their principles with utmost dedication, in the face of a brutal, fundamentalist regime. And through years of suffering and sacrifice, they rose to the leadership of the opposition and qualified to lead the movement through the most difficult and tortuous junctures of its history.

economic and educational realms. She stressed on women’s freedom of choice of clothing, and their equal rights in marriage and divorce.2

She has also launched an extensive international campaign, urging all democratic governments to compel the clerical regime to release all prisoners arrested during the uprising, particularly women who are imprisoned under torture and face the death sentence.

At the same time, she called on them to help guarantee freedom of speech and assembly

in Iran and abolish women’s repression and the compulsory veil.

The Women’s Committee of the National Council of Resistance of Iran urges all women’s rights advocates and freedom lovers to support the courageous struggle of Iranian women and support its campaigns including those for the release of women political prisoners in Iran.