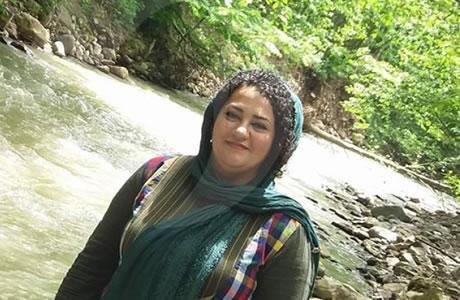 Woman political prisoner Atena Daemi sent an audio message from the Quarantine ward of Qarchak Prison in Varamin and announced, “I ended my hunger strike today, February 15, 2018, to stay alive and remain as a thorn in the eyes of my enemies.”

In another part of this audio message, she said, “I end my hunger strike so that my pen will continue to target your hearts. And I tell you, ‘Don’t tire yourselves because I will never back down from my positions. I will never apologize for the crime I have not committed, because as a human being I am entitled to freedom of speech, opinion and protest, and no one should deprive me of my rights. I tell you that every day I will let the world know of the lack of independence of the Judiciary and the injustice and oppression. Every day, I will shout in your ears of your own laws being broken by yourselves. You beat up and brutalized and arrested my family. Wait for the consequences of this savagery.”

Atena Daemi also noted the critical conditions of Golrokh Iraee who is still on hunger strike. She said in part, “On Tuesday, February 13, Golrokh switched her dry hunger strike back to wet due her deteriorating conditions. Now, she is taking only water, sugar and salt. She is not well. I will continue to support her with all my existence and together, we are going to insist that the principle of the separation of prisoners’ categories must be upheld.”

Ms. Daemi revealed in her audio message that after arresting her mother and sister on Tuesday, February 13, Evin Prison officials had beat up with batons and electric shockers. After a few hours, they demanded them to convince Atena to stop sending declarations out of the prison. When her mother and sister refused to accept this demand, they told them to sign papers pledging that Atena will not send out any more declarations.

Another revelation in Ms. Daemi’s message was that the head of the staff of the Women’s Ward in Evin had told the Prosecutor in front of the ward’s prisoners, that they had not complained from Atena Daemi and Golrokh Iraee and that they should not blame her staff for the prisoners’ transfer to Qarchak.

At the same time, the letter signed by prisoners of the Women’s Ward of Evin refuted another false claim by Haj Moradi, the Prosecutor, that they had demanded the transfer of their two fellow inmates.

According to Atena Daemi in this audio message, officials of Evin Prison had declared that “if Atena and Golrokh sign a pledge and apologize, we will transfer them back to Evin in an hour.” Ms. Daemi responded, “I will never apologize for the crime I have not committed.”

In her message, she reiterated, “Be aware that I do not want to commit suicide, and I do not have any desire to die. To the last drop of my existence I will stand up to these insatiable (power)-hungry people. And whatever happens to me or Golrokh, it is none but murder.”

In this message, Atena Daemi urged all human rights activists and international organizations to “pay more attention” to the situations of Golrokh Iraee and Soheil Arabi who are still on hunger strike, and “do not spare any effort to save their lives.”

Call for urgent action to free women arrested in Iran