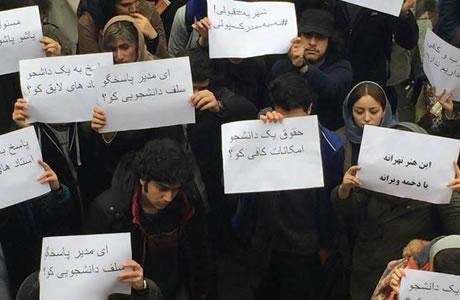 Students of Tehran’s University of Art and the University of Orumiyeh (NW Iran) staged protests against new policy to receive tuition from students. At the same time, plundered women and men held a protest in Rasht (N Iran).

Students of Tehran’s University of Art held a protest outside the office of the university’s president on Saturday, February 17, 2018, against the policy of receiving tuition from students. They also complained of constructural, educational, cultural, financial and welfare problems at the university.

Masters students of the University of Orumiyeh, capital of West Azerbaijan Province, also held a protest on February 17, for the third day against the policy of taking tuition from students. Their protest was also held outside the university president’s office. Orumiyeh University students held protests also on February 14 and 15 in the same place.

Women and men plundered by the Caspian Institute in Rasht, capital of northern Gilan Province, held a protest on Saturday, February 17, outside the company’s branch in Golsar. Women actively engaged in this protest and their chants could be clearly heard in the crowd when they protested the company’s thievery and plunder.

The protesters held similar rallies on January 23, 28 and 30 as well as on February 6 and 13 to demand their plundered deposits.