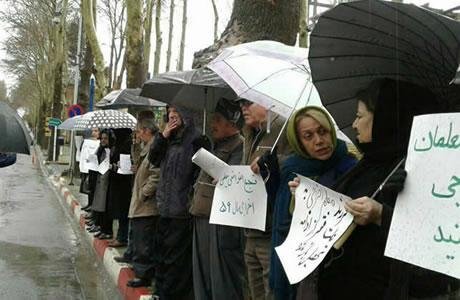 Teachers of Sanandaj, men and women who were expelled from their jobs on unfounded allegations in 1979-1981 staged a protest outside the Governorate of Kurdistan on Sunday, February 18, 2018.

The teachers demand their past-due wages, elimination of discrimination in their jobs, making official the employment of contract teachers, and let the expelled teachers go back to work.

Some 100 managers of kindergartens in Tehran staged a protest outside the Labor Ministry against a memorandum signed between the Welfare Organization and the Education Ministry on Sunday, February 18, 2018. They want the memorandum revoked.

According to this memorandum, children between 4 to 6 years of age, are going to be taken care of by the Ministry of Education, creating crises in the kindergartens.

One of the protesting managers said, “Most of the women working at the kindergartens are heads of household and their families’ breadwinners. If kindergartens are to take care of children only 1-3 years old, many of these women will lose their jobs.”

Pre-school educators for nomad children in Izeh also staged a portest against recruitment of inexperienced forces based on fraudulent relations. They also blamed officials of the province for not paying attention to this issue.