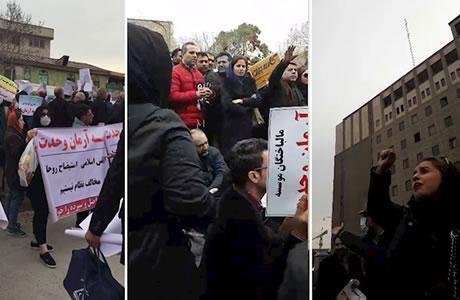 A large group of discontented women and men staged protests in Tehran, Rasht, and Mashhad on Wednesday, February 21, 2018.

Women and men cheated by the Caspian Institute, Arman-e Vahdat of Ahwaz and Afzal-e Tous gathered in a place across from the parliament (Majlis) in Tehran and demanded reimbursement of their deposits and savings.

The retirees of the armed forces, and social services also gathered in Tehran outside the Majlis to protest against injustice and their plundered wealth.

In Rasht, women cheated by the Caspian Institute staged a protest outside the Golsar branch in this city.

In Mashhad, the men and women plundered by the IRGC-backed Caspian Institute gathered in protest outside one the company’s branches in the city. They demanded their savings back.

Iran: A number of dervish women imprisoned in Qarchak identified