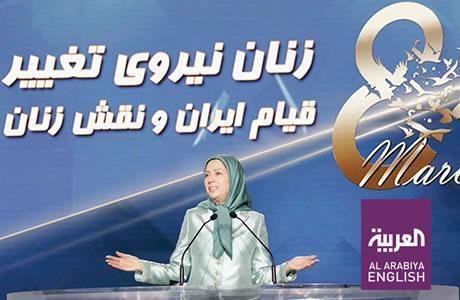 The English Al-Arabiya news website covered the International Women’s Day conference in Paris on February 17, 2018. Following is the story published by Al-Arabiya English:

Women played a key role in recent protests in Iran, taking to the streets to eliminate the clerical regime and to liberate the entire nation, said Maryam Rajavi, an Iranian opposition leader on Saturday. She added that this was “a goal that would certainly be realized”.

Rajavi said that present circumstances provide the potential for continuing protests and that Iranian women should assume the responsibility of furthering the uprising. This responsibility is two-fold: First, shattering the wall of fear and disbelief, and second, organizing protests. The protest gatherings of recent months and their climax in the eruption of the uprising once again showed that brave women have been able to change the situation and expand the protests.

The President-elect of the National Council of Resistance of Iran declared her position in an international conference in Paris organized by the NCRI’s Women’s Committee on the verge of the March 8, International Women’s Day.

Luminaries, politicians, women rights activists, and Iranian expatriates from Europe, the Middle East, and the United States filled out the large auditorium.

Rajavi said the women of Iran have assumed their activist role on the basis of their suffering and sacrifice, and with determination to achieve freedom after four decades of resisting clerical rule. “Regime change is the right of [the] Iranian woman. At the same time, it is her only way to achieve freedom and equality. As attested by the experience of the past 39 years, this regime has left them no other way or method,” the NCRI president-elect said.

According to Rajavi, the specific responsibility of women is to shatter the atmosphere of fear, repression and disbelief and to revive hope and courage in people and reinforce the power of youth in confronting suppression.

Anti-government protests took place in 142 Iranian cities and towns throughout Iran in late December and January. These have continued into February, shaking the clerical regime to the core as the people, in particular the youth and women, manifested their desire for regime change. Some 50 protesters were shot to death. At least 8,000 were detained and at least 12 protesters were killed during detention. The most senior officials in Tehran acknowledged that the protests were organized by the People’s Mojahedin Organization of Iran (PMOI/MEK), the principal Iranian opposition movement, and that women played a leading role.

Misogyny is one of the main characteristics of Islamic fundamentalism. The Iranian women’s struggle with the women activists of the People’s Mojahedin Organization of Iran as its vanguard, is the struggle against the focal point of the Islamic fundamentalism, which is the clerical regime ruling Iran. The overthrow of the theocracy in Iran will bring about a major achievement for the region in general and for women in particular.

Linda Chavez, the former White House Director of Public Liaison said: “Iranian women young and old played an indispensable role in the recent protests. This is not simply a political development. It is very significant culturally that women are challenging the Islamic fundamentalists ruling Iran. But one has to keep in mind that this is not happening in abstract. Over the past four decades the Iranian women have demonstrated a remarkable resilience and have paid a very heavy price for their resistance. Tens of thousands of them, most notably members of the People’s Mojahedin Organization of Iran were killed in this process. It is very telling that Mrs. Maryam Rajavi, the President-elect of the National Council of Resistance of Iran has been the inspirational figure, and the face of the Iranian resistance has led the resistance to unseat the ayatollahs and establish a democratic Iran based on freedom and gender equality.”

According to Rama Yade, the former French Minster for Human Rights, “The world should speak out as strongly as possible in defense of detained protesters, in particular women protesters. What is at the stake is our values and principles. When people of a nation like Iran come out and speak out so strongly, hiding behind political or petty economic considerations is simply immoral and totally unacceptable. The West in general and Europe in particular should make it clear to Tehran leaders that business as usual is over. They should be held accountable for their crimes and should realize that any trade hinges upon the improvement of the human rights situation in Iran. The first step is to release all the detained protesters, every single one of them.”

Rajavi elaborated on how misogyny and imposed restrictions are enshrined in every aspect of the theocracy ruling Iran, and she underscored that suppressing women’s most rudimentary rights is an integral part of the repression that has kept the regime in power.

“Anything that is forcibly imposed on people is against genuine Islam, whether it is imposed religion or the veil,” she said. “Mandatory veil is against Islam and is only meant to enchain women, facilitating a general social clampdown.”

Dr. Hada Badran, president of the Arab Women’s Alliance from Egypt stressed: “Misogyny is one of the main characteristics of Islamic fundamentalism. The Iranian women’s struggle with the women activists of the People’s Mojahedin Organization of Iran as its vanguard, is the struggle against the focal point of the Islamic fundamentalism, which is the clerical regime ruling Iran. The overthrow of the theocracy in Iran will bring about a major achievement for the region in general and for women in particular.

Supporting the Iranian people’s uprising and defending the Iranian women in this path is a moral responsibility and a necessary step in struggle against Islamic fundamentalism.”

Rajavi urged the women protesters from various social strata in Iran to get further organized and to expand resistance councils and bastions of rebellion throughout the country. “The uprising in January showed that organization is a prerequisite to advancement. So you must try to organize your other sisters. I would like to stress the fact that to expand the uprising and to overthrow the clerical dictatorship, we need to create hundreds and thousands of opportunities and this is something that all of you free women of Iran can do.”
The Iranian opposition leader urged the international community in general and the women activists in particular to stand in support of the Iranian people and the Iranian women’s movement for freedom. “I would like to reiterate that supporting the struggle against fundamentalism is the greatest project of our time for advocates of women’s rights,” Rajavi said. “Since the heart of fundamentalism beats in Iran and under the rule of the mullahs, supporting the Iranian people’s uprising for the overthrow of the regime is doubly important. I am confident that the women of the world will undertake their historic responsibility.”