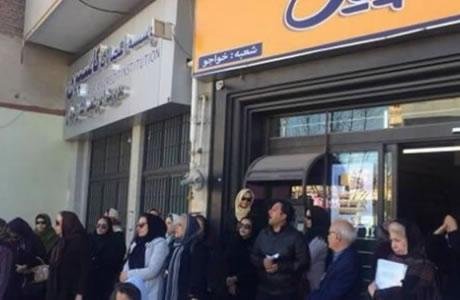 A group of women and men plundered by the Caspian Institute staged a protest on Thursday, February 22, 2018, in Kerman, capital of Kerman Province in southern Iran.

The protesters who had gathered outside the Khajoo branch, demanded reimbursement of their money.

On Wednesday, February 21, 2018, some 60 security staff of the Behesht-e Madaran were expelled from the municipality of the Third District of Tehran. It is said that the district mayor by the name of Salimi has laid off the employees to replace them unlawfully with other personnel. The laid off employee who had unpaid wages, gathered outside the municipality and demanded to return to their jobs.

On the same day, teachers of three high schools in Bandar Mahshahr, in Khuzistan Province, southwestern Iran, refused to teach their classes and went on strike to demand eight months of wages not paid for their overtime work.

Iran: A pregnant woman among those arrested in attack on Dervishes