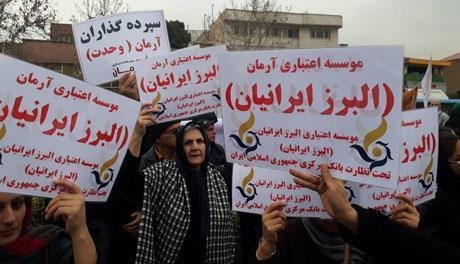 Iran: Plundered women and men stage protest across from Majlis

Protesters cheated by financial institutes of Alborz-e Iranian and Caspian, including a large number of women, staged a protests outside the mullahs’ parliament, Majlis, in Tehran on Sunday, February 25, 2018.

They demanded their savings back and protested officials’ indifference in responding to their requests.

The protesters chanted slogans accusing the Alborz and Caspian institutes of thievery and injustice.

On Wednesday, February 21, 2018, protesters plundered by Arman-e Vahdat, Caspian, and Afzal-e Tous also staged a protest in Tehran in front of the Majlis and demanded their deposits.