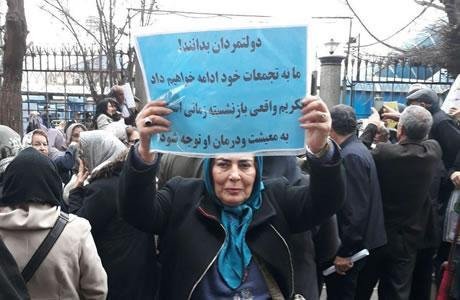 A group of retirees, a large group of whom were women, staged a protest outside the Labor Ministry in Tehran on Tuesday, February 27, 2018.

The protesters included the retired staff of the Education Ministry, the Health Ministry, and several other government agencies. They demanded elimination of discrimination in payment of their pensions as well as increasing the amount of their insurance.

One of the placards carried by the protesters read, “We demand our salaries be increased to 4 million toumans to reach the poverty line.”

A retired woman said, “After thirty years of serving the government as a nurse, now in my retirement days, I have to look for a second job to pay for my minimum living expenses.”

Women also actively participated in the protest of plundered people in Tehran. On Monday, February 26, 2018, a group of protesters who have been cheated by Tose’eh Alborz-e Tehran institute staged a protest outside its branch in Tehran and blocked the road.