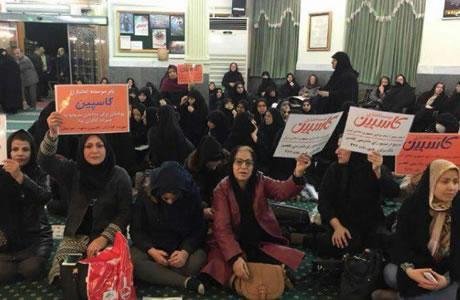 Laboratory employees of Razi Hospital in Ahvaz went on strike on Friday, March 2, 2018, to protest against the government’s failure to pay their salaries for six months.

Ahvaz is the capital of Khuzestan Province in southwestern Iran.

A group of applicants for Mehr Housing units including a large number of women, staged a protest outside the Planning and Programming Organization in Tehran on Thursday, March 1, 2018. Their protest was against the contractor’s failure to provide them the housing units they had paid for five years ago.

The Ministry of Roads and Transportation had announced in July that they would open various units of Mehr Housing in August, but after six months and at the end of the Iranian year, these units have not been delivered to their owners.

On Wednesday, February 28, 2018, a group of students of Laboratory Sciences staged a protest outside the Ministry of Health in Tehran. They protested acceptance of students from other irrelevant majors and the lack of masters and doctorate degrees for laboratory sciences.

On Tuesday, February 27, a group of plundered women in Mashhad disrupted the speech of a mullah attempting to justify swindling of their deposits by the fraudulent Caspian Institute. They chanted, “Death to Seif,” president of the Central Bank of Iran, and disrupted mullah Hosseinzadeh’s speech.

Iran: A young woman threw herself off a bridge in Zanjan