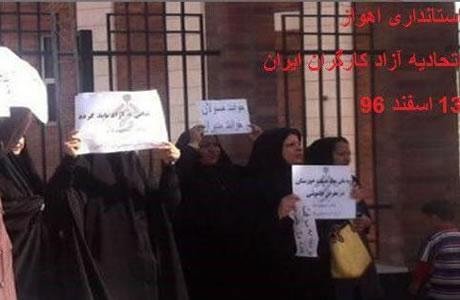 Families of the arrested workers of the National Steel Group of Ahvaz staged a protest on Sunday, March 4, 2018 against the arrests of nine workers of this major industrial complex.

Other workers and a number of women employees of the company also participated in the protest gathering of the families of the arrested workers.

They chanted slogans demanding freedom of their arrested colleagues. They also brought up the demands for which they had started a strike since 12 days before.

On Wednesday, February 28, 2018, students of Tehran’s Art University staged a protest in front of the university against the problems they face at school. They tied black ribbons to their arms and left the university’s campus. Their protest was against the university’s faculty of science and professors, educational and cultural problems, cancellation of student campings, shut down of student publications and festivals, shortage of facilities and workshops, and heavy tuition.