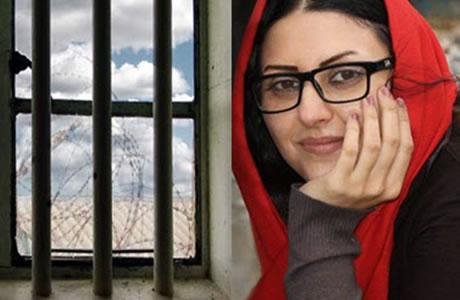 Political prisoner Golrokh Iraee is in dangerous health condition on the 36th day of her hunger strike, but she has refused to give up her demand.

According to reports from Qarchak Prison in Varamin, Ms. Iraee had extreme difficulty breathing and speaking, but she will not break her hunger strike until she is returned to Evin Prison.

She has received IV fluid and anti-nausea injections over the past several days but her muscles cramp and inflate. The dispensary’s doctor says “this is a dangerous condition and this might happen to her heart muscles as well. She must be attended to as soon as possible.”

Close relatives have reported that Golrokh had a minute-long call with her mother when she said she is absolutely resolved to continue her hunger strike.

Amnesty International issued a statement on March 9, 2018, expressing alarm at the condition of Golrokh Iraee and demanding her and Atena Daemi’s immediate release.

AI wrote, “Golrokh Ebrahimi Iraee, who has been on hunger strike for 35 days, is in very poor health. In the past week, she was placed on IV fluids without her consent, and at times has been unable to move. She is suffering from severe cramping in her muscles, which the prison doctor has confirmed is a result of the hunger strike.”

Philip Luther, Amnesty International’s Research and Advocacy Director for the Middle East and North Africa, has been cited as saying, “We are extremely alarmed by reports from Shahr-e Rey prison about the targeting and escalating ill-treatment of Golrokh and Atena. They should never have been imprisoned in the first place, and now it seems the Iranian authorities are deliberately subjecting them to cruel, inhuman and degrading treatment because of their outspoken activism and continued human rights work even behind bars.”

Haj Moradi, deputy Prosecutor of Evin overseeing political prisoners, has told the prisoners’ families that Golrokh will not be returned to Evin even if she dies. Other reports indicate that the order for transfer must be issued by Tehran’s Prosecutor, Jaafari Dowlatabadi.

Political prisoners Golrokh Iraee and Atena Daemi are held in the quarantine ward of Qarchak Prison in conditions similar to solitary confinement. They are not allowed to leave the ward and no one has permission to visit them. The prisoners have been deprived of contacting their families and can call them only once a week in the presence of prison agents.