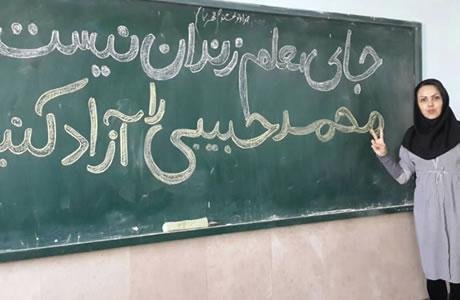 Women and men plundered by the IRGC-backed fraudulent Caspian Institute gathered in protest outside its office in Golsar district of Rasht, on Tuesday, March 13, 2018.

The protesters first chanted slogans outside the office and then entered the office of the institute. They chanted, “Every Iranian must seek Rouhani’s interpellation” and “We want no hollow promises, give us our money back!”

On the same day, house owners in Arak, Central Province, staged a protest outside the Governor’s Office against officials’ inaction. More than 1,800 families in this city are awaiting their answers regarding their housing from the government.

In another development on Tuesday, March 13, teachers in Tehran and other cities staged protests demanding freedom of imprisoned teacher, Mohammad Habibi. They wrote on their classes’ blackboards or held placards, demanding his release: “Teachers do not belong inside prisons.”

Also the students of Science and Industries University (Elm-o San’at) in Tehran held a picket line in protest to the sentences issued for students, including Leila Hosseinzadeh. They held placards which read, “Our collective spirit has not died”, “Every one of us is a Leila Hosseinzadeh”, “Where is Parisa Rafii?”