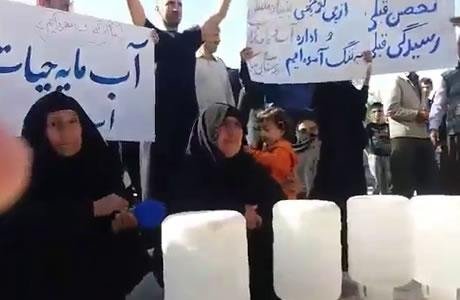 Women and men residing in Sarpol-e Zahab, the center of earthquake in western Iran, protested a visit by Rouhani’s deputy heading the Planning and Budget Organization to this city.

They called the government “liar” and made Nobakht and his accompanying delegation including the governor of Kermanshah, leave the scene.

The suffering people of Sarpol-e Zahab have been living in tents, four months after the earthquake. Their living conditions are unsanitary and very difficult as they are living among the rubbles, garbage and sewage. The freezing cold weather in Kermanshah Province led to the deaths of a number people in this area, including a number of children and infants.

Iran: Suffering mother of Soheil Arabi spent turn of the year outside prison