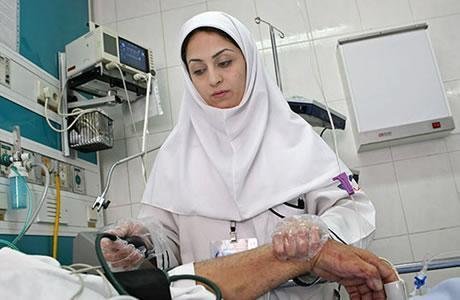 Iran: 28 nurses brutalized in one year

Twenty-eight nurses were physically beaten up last year in Iran.

Mohammad Sharifi, Vice-President of the Nursing Organization, said the above and added, “Nurses continue to suffer from injustice in the country’s health system and they believe they have been deprived of their rights… This is while nurses do the greatest service to patients in medical centers.”

Sharifi believes “the nursing community shoulders the main burden of the country’s health system and is at the forefront for responding to patients. As a result, they are exposed to many dangers. Nurses are threatened by dangers due to their job such as skeletal and muscular problems, problems due to chemotherapy and the issue of beating of nurses which unfortunately, has been on the rise.”

Sharifi added, “The main complaint of nurses is that a legislation which was passed 10 years ago has not been implemented, yet.”

He emphasized, “If nothing happens in the first three months of the (new Iranian year), nurses and the Ministry of Health will have to face a lot of tensions.” (The state-run Salamant News website, March 22, 2018)

The state-run Salamat News cited the Minister of Health as saying that the Nursing Services Tarrif Act, passed 10 years ago but not implemented since, has not been validated and no budget considered for it.

Homayoun Hashemi, member of the parliamentary Health Committee, also announced that Iran faces a shortage of 100,000 nurses, while 1,000 nurses immigrate from Iran every year.