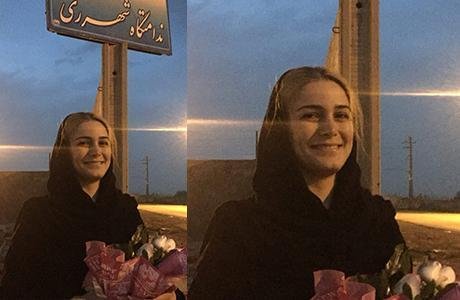 Maryam Shariatmadari was sentenced to one year in jail on the charge of “encouraging corruption through removing her veil.”

The decree was issued on March 25, 2018, by the 2nd Criminal Court of Tehran Province.

Former political prisoner Nasrin Sotoudeh who is Ms. Shariatmadari’s lawyer emphasized that her client had been discriminated against by the Iranian regime’s Judiciary.

She said, “Ironically, the Judiciary ignored the case of a girl who had been sexually abused by her father, but surprisingly issues such heavy sentences for women who remove their scarves.”

Ms. Sotoudeh added, “I believe that the protests against the compulsory veil will not be subdued by such unusual decrees that do not comply with legal and judicial standards.”

Maryam Shariatmadari, 32, is a student of Computer Sciences at Tehran’s Amir Kabir University. She was pushed off a telecoms box by a State Security Force officer and hurt in the knee on February 23, 2018, when she was protesting the compulsory veiling by removing her shawl.