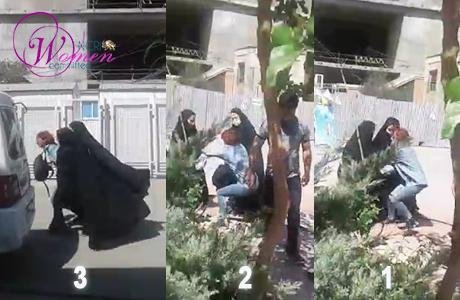 The policy of enforcing the “compulsory veil” on Iranian women has formed the core of the mullahs’ misogyny since the beginning of their rule, and women have been deprived of virtually all their human rights under the clerical regime.

Unable to respond to the needs of a progressive and freedom-loving society that had torn the bondage of a monarchic dictatorship in 1979, the new fundamentalist regime in Tehran found the solution for imposing its rule in coercing women to wear the veil and suppressing the entire society thereby. The solution fit well with the mullahs’ misogynist vision and allowed them to conceal and justify their political oppression and savagery in a religious wrap.

This is why misogyny and has turned into a pillar of the mullahs’ rule, just as important as their policies of warmongering, export of terrorism and acquiring the nuclear bomb.

They claim that women’s veiling has been instructed by Islam while the Quran stipulates, “There is no compulsion in religion.” Faith is based on free choice and free will. Therefore, anything that is forcibly imposed on people is against genuine Islam, whether it is imposed religion or the veil.

The Iranian Resistance and the People’s Mojahedin of Iran have always advocated women’s equal rights and freedom of choice of what they wish to wear.

The Mojahedin or the PMOI (MEK), the Muslim member organization of the Iranian Resistance, has opposed the compulsory veiling since the outset and clearly declared their opposition. The women’s march on March 8, 1979, although they cover their own hair.

The National Council of Resistance of Iran (NCRI) adopted a plan in 1985, in which it outlined women’s freedoms underlining their freedom to choose their own clothing and covering.

The NCRI President-elect Iranian women’s rights, in 1995, underlining their equal rights in all spheres of life and their freedom in choice of clothing and covering.

Most recently, the abolition of the compulsory veil and suppression of women in her meetings in the Council of Europe, in January 2018.

Today, after almost four decades of excessive restrictions imposed on women, and despite deployment of at least 26 cultural, religious, military, disciplinary, legislative, judicial and executive agencies, the regime’s failure to compel Iran’s resilient women and girls to “properly” observe the veil has turned into a political scandal for the regime which it views as a national security threat.

The regime’s theoreticians acknowledge that in light of years of carnage, fraud, and economic bankruptcy, and a pervasively disgruntled populace, the only remaining “Islamic” symbol of the regime is the women’s veil. If they lose this, too, nothing will remain of the regime’s claims to Islam and its raison d’etre for holding on to power under the absolute rule of a supreme clergy.

Furthermore, they will no longer have any reason to dispatch their revolutionary guards, Bassij, security forces and plainclothes agents to the streets to terrorize the public.

The SSF Commander, Hossein Ashtari, revealed in September 2016 that, “Some 2000 women who wear improper clothing are arrested every day in Tehran and some other provinces.” (State-run Tasnim news agency – September 29, 2016)

This figure amounts to 730,000 arrests in a year, a minimized figure both due to lack of transparency on the part of the regime, and the increase in suppression of women in 2017 compared to 2016.

Throughout the year, Iranians disseminated video clips of women getting arrested in parks and streets for mal-veiling and dropping the veil. These video clips are moving in terms of bringing to life the horror Iranian women face every day on the streets. The images of lone women being violently dragged into SSF vehicles and vans, while screaming and struggling to break out of their hands, are devastating. And these scenes are repeated at least 2,000 times every day all across Iran.

Despite all this, one of the clerical regime’s high ranking religious scholars admitted that the mullahs have failed to impose the compulsory veil on Iranian women.

In a meeting with the SSF Commander, Hossein Ashtari, on October 8, 2017, Mullah Jafar Sobhani said, “Despite all the various emphases in recent years, we have not been able to achieve our goals regarding mal-veiling.” (State-run Fars news agency – October 8, 2017)