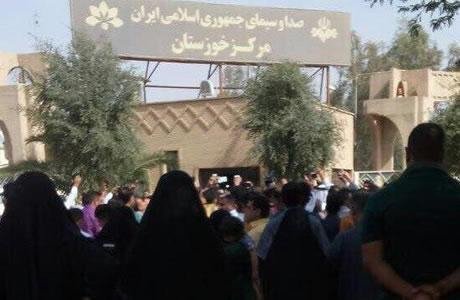 Thousands of women and men staged extensive protests in Ahvaz, capital of Khuzestan Province in SW Iran, on March 28 and 29, 2018, against racist presentation in the state-run television. Women actively participated in these protests outside Khuzestan’s Radio and Television building.

The protest was against a children’s program broadcast on the second day of the New Iranian Year by the state-run television, in which the presenter placed dolls with different folkloric costumes on the map of Iran where they belonged. But for southwestern Iran and Ahvaz, he placed a doll which did not have the Arab costume.

Protesters put on Arab garbs and chanted slogans in Arabic and Farsi, demanding resignation of the head of the state Radio and Television Station in Khuzestan, official apology to the Arab ethnic group from managers of the state Television Network 2, and reprimanding of those in charge of the racist program.