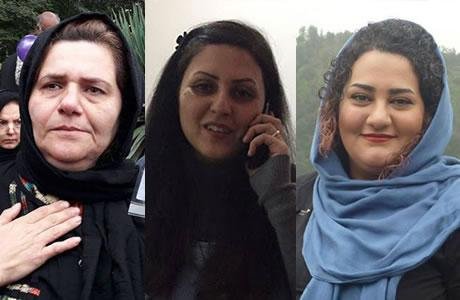 Golrokh Iraee’s health is in an alarming condition after 54 days of hunger strike.

Political prisoner and human rights defendant Golrokh Iraee has been on hunger strike since February 3, 2018, in protest to her unlawful transfer to Qarchak Prison.

She has lost more than 20 kilograms, suffers from plummeting blood pressure, dryness of tongue, and inflammation of legs. She is not able to walk.

Ms. Iraee has refused serum injections, saying previous promises by prison officials to follow up her case have not been delivered and she would not accept any more serum injections.

On the other hand, political prisoner Atena Daemi has caught a severe cold and suffers from high fever. One side of her face is numb and she has been told by prison doctors that she might have suffered a blow or shock during their violent transfer to the mothers’ ward on March 12, 2018, which has led to the paralysis of the nerves on one side of her face.

In another development, officials of the Greater Tehran Prison prevented Ms. Farangis Mazloum from visiting her son, Soheil Arabi.

Monday, March 26, 2018, Ms. Mazloum went to visit her son in the Greater Tehran’s Prison for the first time in the New Persian Year, but was not allowed to do so.

Political prisoner Soheil Arabi ended his hunger strike after 55 days, on March 20, 2018, upon the request of his mother and mothers of other prisoners. His health condition has been reported critical and he does not receive any medical care.