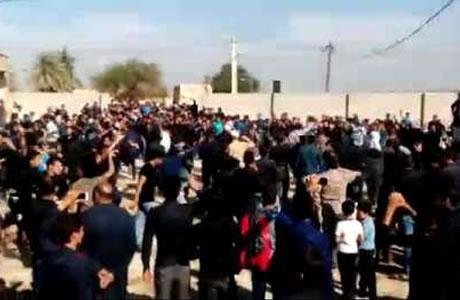 A group of women staged a protest on Sunday, April 1, 2018, in the streets of Shadegan (southwestern Iran) chanting in Arabic, “I give my life for Ahvaz.”

The protest took place in step with the protests and demonstrations of thousands of Arab Iranians since Wednesday, March 28, against an offensive program insulting Iran’s Arab citizens broadcast by the state television in Nowruz holidays.

The protests have continued until late Sunday night, April 1, in Ahvaz and other cities and villages of Khuzestan.

Security forces have been dispatched from other cities and stationed in Khuzestan cities on Monday, April 2, to quell any outbreak of protests during this traditional Persian holiday on the 13th day of the New Year, called Sizdebedar. Reports from Ahvaz, Abadan, Khorramshahr, Mahshahr and other cities indicate a de facto state of curfew in most of Khuzestan cities.

At least two women have been identified among those arrested during the protests in Ahvaz on Friday, March 30, 2018.