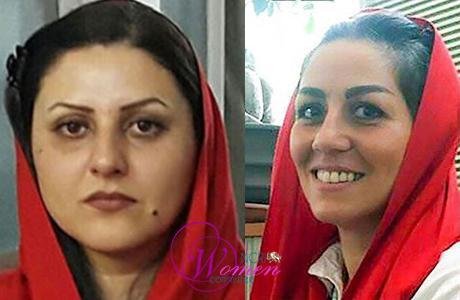 Political prisoner Maryam Akbari Monfared declared on Wednesday, April 4, 2018, that she will to on hunger strike for three days in solidarity with the hunger striking political prisoner Golrokh Iraee. She urged international human rights organizations to take urgent action to save the life of Golrokh Ebrahimi Iraee.

She has reportedly been transferred to a hospital near Shahr-e Ray (Qarchak) Prison for her constant feeling of nausea and vomiting bile due to damaged gall bladder. The hospital’s name has not been announced. There has been no news of Ms. Iraee after her hospitalization and her family’s inquiries have not been responded to.

In her open letter to Ms. Iraee, Maryam Akbari wrote, “My dear Golrokh, I remember the days when Arash (Sadeqi, Ms. Iraee’s husband) was on hunger strike and you patiently and firmly anticipated the future and counted the days in anxiety by without asking for visits or telephone contacts… May be this is a difficult and painful life; may be it is agonizing but let there be not doubt that we have lived honestly. We will overcome this pain. Today, freedom is one day closer to us.”

In the same letter, Ms. Akbari announced, “I have learned that after 60 days of hunger strike in the notorious Qarchak Prison, Golrokh is neither able to walk nor able to speak, and that she has lost over 20 kilograms. To support her and her demand to return to Evin, I start a three-day hunger strike on April 4, 2018. I urge all conscientious human beings and international human rights organizations to take urgent action to save Golrokh’s life.”

Two political prisoners Golrokh Ebrahimi Iraee and Atena Daemi were unlawfully transferred to Qarchak Prison on January 24, 2018, after being brutalized because they had resisted against interrogation based on a new case fabricated against them. They were exiled to the notorious prison in Varamin with substandard and deplorable living conditions to endure more pressure and physical and psychological torture.

Maryam Akbari Monfared was arrested after the major uprising on December 27, 2009, in Tehran and was sentenced to 15 years in jail by a Revolutionary Court.