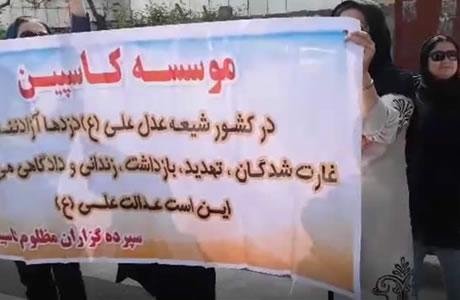 On Monday April 9, 2018, women plundered by the Caspian Institute staged a protest outside Gilan Province’s Governorate building in Rasht, and demanded reimbursement of their assets plundered by this IRGC-backed institute.

On the same day, plundered Caspian clients staged protests in Mashhad (northeastern Iran) and Kerman (southern Iran) outside institute’s branches. The protest in Kerman led to clashes with the State Security Force (SSF).

Security forces prevented formation of a protest gathering by plundered people in Tehran outside the parliament. They arrested a number of protesters and collected their banners.

Women and men plundered by Arman-e Vahdat financial Institute also staged protests on April 9, 2018, in Ahvaz (capital of the southwestern province of Khuzestan) and Kouhdasht (in Lorestan Province, western Iran). They chanted, “death to Rouhani” and accused his bankrupt government of stealing their money.