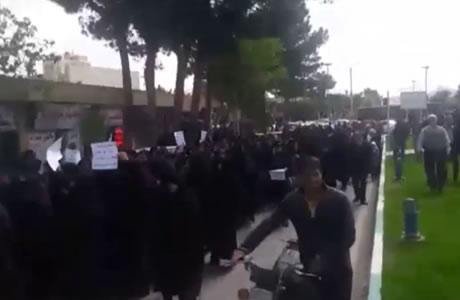 Isfahan’s farmers have been staging protests for three consecutive days from April 9 to 11 in Khorasgan Square of Isfahan, central Iran. Women’s presence has been remarkably extensive in these demonstrations which have taken place despite massive control and obstructions by state security forces.

Anti-riot guards were on alert, lining up the streets and protest routes. They tried to prevent formation of the demonstration.

The protesters, however, shouted, “Guns, tanks, machineguns are no longer effective.”

Farmers of eastern Isfahan have been protesting continuously for over one month to gain their share of water for farming from Zayanderood. They enjoy the support of all people and youths in Isfahan Province located in the center of Iran.

Zayanderood used to be a copious river passing through Isfahan, one of Iran’s major capitals and centers of tourism. Under the clericl rule, this river has dried up due to numerous dams placed on its route to divert water to Revolutionary Guard Corps (IRGC) compounds and facilities for military purposes.