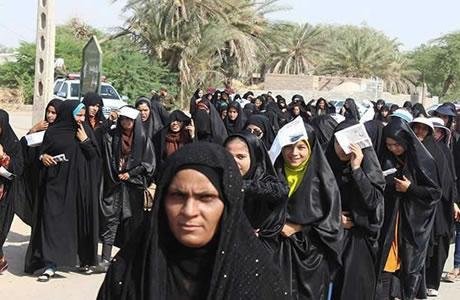 Women residing in Roudbar’s Golshahr-e Imam Reza staged a protest against lack of drinking water in their township.

Roudbar is located in Kerman Province, southern Iran. The residents of Golshahr have repeatedly protested against water cut-offs in this township but have not received any response.

In another gathering, executive directors of medical centers in Khuzestan Province, staged a protest against their expulsion on Saturday, April 7, 2018, outside the office of the President of the Medical Sciences University of Ahvaz.

Directors of various MSU medical centers in Ahvaz had also staged protests on March 27, protesting being laid off after three years of service. One of the directors said officials of Ahvaz’s Medical Sciences University had been pursuing the expulsion of the medical centers’ directors since January. The decision has left over 60 families without any source of income.

The MSU President claimed that many of their duties had been relegated to the private sector but did not provide any specific answer to the demands of the laid off directors.