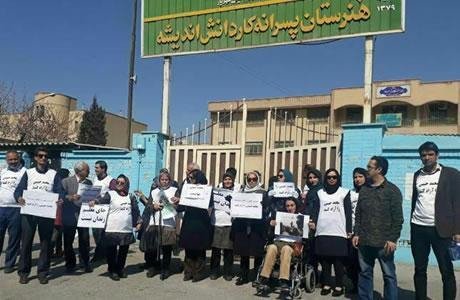 The protest was held outside the Kar-o Andisheh Professional High School in Shahriar, Tehran Province, where this political prisoner used to teach. The protesters demand Mr. Habibi’s release.

Mohammad Habibi, member of the board of directors of the Iranian Teachers’ Trade Union, was brutalized by IRGC agents on Saturday, March 3, 2018, at this school before the eyes of his students. He was taken to jail after her residence was ransacked.

On the same day in Yazd, central Iran, more than 400 teachers and staff of the Education Department, mostly women, staged a gathering outside the Governorate of Yazd protesting discrimination against students who go to public schools due to poverty. They demanded elimination of this discrimination. Students who go to private schools are allocated 3 million touman per capital budget, while in public schools, each student is granted a budget of only 700,000 toumans.