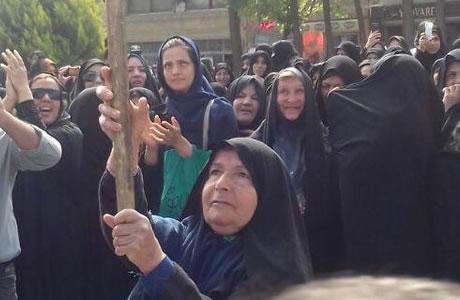 On Thursday, April 12, 2018, the daily reported, “Farmers of Isfahan are seeking againt to organize protest rallies to gain back their water quotas. This time, however, the women of Khorassgan are getting involved in the protests in step with men.”

Protesting women shouted, “It is a mourning day, we have to mourn for the farmers’ living conditions.”

Farmers of eastern Isfahan have been protesting continuously for more than a month to gain their share of water for farming from Zayanderood. They enjoy the support of all people and youths in Isfahan Province located in the center of Iran.

Zayanderood used to be a copious river passing through Isfahan, one of Iran’s major capitals and centers of tourism. Under the clericl rule, this river has dried up due to numerous dams placed on its route to divert water to Revolutionary Guard Corps (IRGC) compounds and facilities for military purposes.

Iran: Students of Shiraz U protested explusion of their professor