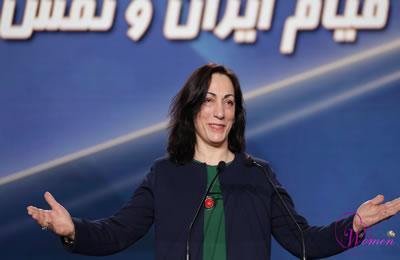 Hail to you all, and hail to the women who resist in prisons and on the streets of Iran.

I’d like to take this opportunity to commemorate Ms. Asma Jahangir, the Special Rapporteur for human rights in Iran.

What a beautiful gathering of women of different races and beliefs. I salute all of you who are fighting for a peaceful and just world, devoid of oppression and discrimination.  I’m sure that our vigorous steps shall bridge the gap in gender discrimination practiced worldwide, in particular the misogyny by religious extremists.

I understand we are short of time and having heard the speeches of Mrs. Rajavi and other dear friends, I’d only like to make a few points.

We are proud because in today’s Iran, women shine like a diamond at the peak of the struggle against religious fascism. Brave women such as Atena Daemi, Golrokh Iraee, and Maryam Akbari Monfared, and numerous other women, are writing a golden page of the history of struggle against fundamentalism with their resistance in prisons.

This year is different for us because we have seen an uprising which was different, both quantitatively and qualitatively, from all other protests in the past.

This uprising of the poor and impoverished in Iran is a fate-making struggle against a regime which rules only by oppression.

What set this uprising apart was the public’s opposition to the regime in its entirety and the war-mongering policies of the clerical regime in the (Middle East) region; they opposed poverty and injustice, gender discrimination, and corruption.

The people’s demands are quite clear: freedom of expression, freedom in choosing one’s own clothing, democracy, a secular republic, and social justice.

The protesters proved that they have made a decisive choice for regime change. And the day is not far when the Islamic fundamentalists ruling Iran will be obliterated in the roaring ocean of our people.

Women’s participation in this uprising was remarkable. Undoubtedly, their considerable participation in political and social realms will guarantee women’s freedom and equality in any conceivable democratic development in future.

Thank you for listening to me.