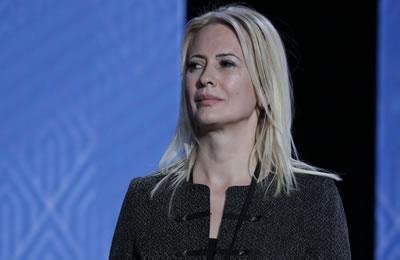 I’m Maria Grecea from Romania, and I joined this cause about five years ago.

And I have to admit that in the beginning, I thought it was something too much to achieve. But every year, I realize the strength of those involved, the power of those who support this movement, (and) the sacrifice of those who want a free Iran.

This year, more than ever, I come with a great deal of confidence, that victory belongs to the Iranian Resistance and the Iranian people who want a free and democratic country.

Finally, the voice of those who no longer support the religious dictatorship is heard all over the world.

For the first time, the Iranian authorities recognize and fear the power of women. Unfortunately, 8,000 of the people who protested against the regime have been arrested, including women. Their courage must inspire us. If they have the courage to protest and put their lives at risk, we must have the courage to be as firm and as vocal as possible…

We must firmly ask our governments, European leaders, and international organizations to stop the repression of protesters and women (in Iran). Moreover, they must recognize the Iranian opposition led by Madam Rajavi as an alternative capable of leading democracy in Iran through the ten-point (plan).

After all that happened in the last few weeks and the whole world saw the unfair way in which the Iranian regime acted against its own people, I think the time for dialogue has passed. The time has come for civilized countries to move to sanctions, to stop any kind of economic or diplomatic relationships, until the violation of human rights in Iran stops.

I wish you all success in your defense of human rights, and I’m sure that victory belongs to those who believe in good will.