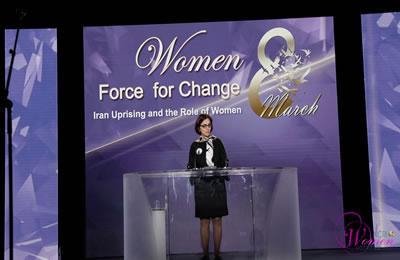 My name is Ramesh Sepehrad. I am a scholar practitioner from George Mason University and I join you from the United States. It is a great honor to be the moderator of such an important event today and on behalf of the organizing committee, I welcome all of you.

Over the years, we have come together in commemoration of the International Women’s Day. 2018, however, has proven to be a different year. We cannot help but to feel the vibe and energy of the recent Iranian uprising in this room.

The uprising that is not just political, social or economic in nature, it is led by courageous women and youth who shout in the streets of cities and towns across Iran and say, “down with Khamenei and Rouhani”, “reformers, hardliner, your game is now over.”

I am reminded of the remarks of Mr. Massoud Rajavi, who years ago said, and I am paraphrasing, if this regime allows women a free choice, just for one hour, the regime will never be able to regain its control.

Needless to say, Iranian regime fears women the most.

When the brave women and girls in many cities such as Tehran, Isfahan, and my hometown Shiraz, protest the compulsory veiling, when the veiled women as well as men join them, it reminds me of the first International Women’s Day right after the anti-monarchic revolution in March of 1979.

Let us be very clear, the women’s struggle in Iran is not about veiling or unveiling.  It is about the free choice. It is about popular sovereignty. It is about freedom.

They have paid and continue to pay a heavy price:

These are just a few examples of the misogynous nature of the regime. You may ask why a regime would resort to such deep and disturbing levels of violence. The answer to that lies in one simple fact: Women are the force of change and it will be the Iranian women who will bring this regime down.

We say no to compulsory rule, religion, and hijab - Sahar Sana’ii